(Reuters) - Toulouse Olympique's Corey Norman has been handed an eight-match suspension for sticking his fingers up the backside of an opponent in a Super League match against Warrington Wolves last week, the Rugby Football League said on Tuesday.

Footage showed the 31-year-old Australian reaching between the legs of Wolves' Oliver Holmes. He has also been fined 500 pounds ($604.70) for the Grade F charge of 'Other Contrary Behaviour'.

Norman pleaded not guilty but the RFL said the chair of the tribunal Sarah Wright and two side members -- both former players -- were "entirely satisfied" his act was intentional.

"The footage of the incident shows a deliberate movement of Corey Norman's left arm and hand over the top of Oliver Holmes and on to his buttocks," the ruling said.

"At no point does the footage show a grabbing of the shorts to push Oliver Holmes down as described by Corey Norman."

Holmes complained immediately after the act and the tribunal said his statement was also considered in proving the charge.

Kenny Edwards of New Zealand was handed a 10-match ban for a similar offence last year.

In 2001, former Australian rugby league international John Hopoate was banned for 12 matches after he was found guilty of sticking his fingers up the backsides of three North Queensland players during a match. 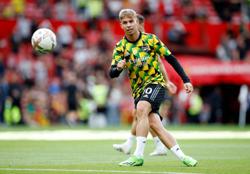