JOHANNESBURG (Reuters) -South Africa have recalled number eight Duane Vermeulen as one of five changes to their starting line-up for the second Rugby Championship test against New Zealand at Ellis Park in Johannesburg on Saturday.

Vermeulen had sat out the international season to date after knee surgery, but has been deemed fit to play and comes in for Jasper Wiese at the back of the scrum. The latter moves to the bench.

The Springboks cruised to a 26-10 victory in the first test in Nelspruit last weekend, their biggest win over the ailing All Blacks in 94 years, and have been forced into two of the changes.

Jesse Kriel comes in on the wing for the suspended Kurt-Lee Arendse, while Jaden Hendrikse will start at scrumhalf after Faf de Klerk was concussed in the opening minute of the last match. Hershel Jantjies comes onto the bench as scrumhalf cover.

The two other switches are both in the front row of the scrum as Bongi Mbonambi comes in for Malcolm Marx at hooker and Ox Nche replaces Trevor Nyakane at prop.

"We made a few changes to the team, but Duane, Jesse and Herschel are all experienced players who know our systems well and have been stalwarts for the Boks," coach Jacques Nienaber said in a media release from South African Rugby.

"Ox has also shown his ability to make his presence felt in the front row, so he is back in the mix.

"Duane has a massive presence on the field and there is no bigger game for him to make his comeback from injury than facing the All Blacks.

"He is an enforcer on attack and defence and we know he will give everything against a physical All Blacks team that are desperate to bounce back strongly from a challenging run of results."

Kriel will form a back three with fellow wing Makazole Mapimpi and Damian Willemse, while Lukhanyo Am and Damian de Allende continue their partnership in the midfield. Flyhalf Handre Pollard retains the No.10 jersey.

Vermeulen will pack down with Pieter-Steph du Toit and captain Siya Kolisi at the back of the scrum, while Lood de Jager and Eben Etzebeth are at lock, and Frans Malherbe makes up the front row with Mbonambi and Nche.

"Our focus is on improving our game and ensuring that we build on our form from last week," Nienaber said.

"We had an honest assessment of our performance, and while there were several positives, there are areas that we need to make a step-up in, and it will be vital to get that right before we travel to Australia and Argentina for the away leg of the tournament." 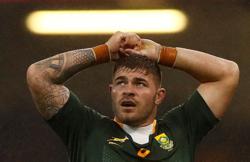