MENDOZA, Argentina (Reuters) - Argentina will add extra emphasis on their mauling in training this week and look to avoid the errors that cost them in Saturday’s Rugby Championship clash against Australia when they meet again next weekend, coach Michael Cheika said.

The Wallabies mauled over for two late tries to turn around a 26-17 deficit and win their opening match of the southern hemisphere championship 41-26.

“I thought we did really well for the first 50 or 60 minutes and then Australia did really well to come back and attack and pressure us. We went a bit individual at the time and were therefore caught out,” Cheika said after the loss against the team he used to coach.

“The biggest area was obviously three tries from the maul, so that’s something we really want to fix. It’s not acceptable.

“We see that as a front line of our team, and that was really disappointing as a team and it’s something we need to work on and transfer into the game,” he said as the focus turns to this Saturday’s meeting in San Juan.

Saturday’s clash in Mendoza proved a see-saw affair before Australia were awarded a penalty try, just after the hour mark, when Argentina illegally tried to stop a driving maul and lock Matias Alemanno was yellow carded to compound their misery.

That proved the turning point and the win was sealed with another try from a driving maul for hooker Folau Fainga’a.

Cheika, who was the Wallabies coach from 2014-2019, added that poor decision making at vital moments also proved costly.

“We have to work harder now. We mustn’t give up on the goals we’ve set ourselves and we are looking to keep putting layer upon layer on our performances,” the Pumas coach added. 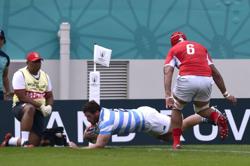