(Reuters) - Argentina will be without their first-choice halfback pairing of Tomas Cubelli and Nicolas Sanchez for the rest of the test series against Scotland, the Argentina Rugby Union said on Tuesday.

Cubelli tore a thigh muscle in the warm-up before Saturday’s 26-18 win over Scotland in the first test in San Salvador de Jujuy while Sanchez suffered a calf tear in the opening 20 minutes and had to be replaced.

The pair will play no part in the second test at Salta on Saturday or the final test at Santiago del Estero on July 16.

Flyhalf Domingo Miotti, who plays his club rugby in Scotland for Glasgow Warriors, and scrumhalf Felipe Ezcurra have been called up as replacements. 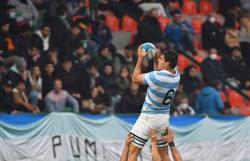