Rugby-All Blacks aiming for 'another level' in second Ireland test

(Reuters) - The All Blacks are preparing for another brutal contest in the second test against Ireland and are looking for an improvement on their performance in the 42-19 victory in the series opener, flyhalf Beauden Barrett said on Monday.

The breakdown and the defence have been identified as areas where the team can take a step up, Barrett said, after the Irish won the early collisions and scored three tries at Eden Park.

"We want to take our game to another level and we have already identified many areas to get better," Barrett said in Dunedin.

"Obviously, there were some missed opportunities out there on the weekend. And although it was our first go at it, we would like to improve a lot."

Backs David Havili, Jack Goodhue and Will Jordan have returned to the camp with coach Ian Foster and two of his assistants after they were all forced to isolate last week following positive COVID tests.

"It's great to see them back it was a tough week for those individuals but we're almost back to full strength," Barrett said.

"It just means we can have a good training week. Last week we were a little bit down on numbers and had to bring people in."

Ireland have never beaten the All Blacks on New Zealand soil but Barrett said he expected the tourists to raise their game for the second of three matches in the series.

"They're such a proud side," Barrett said. "They'll raise their intent because it's do-or-die, the series is on the line this weekend. We know they're coming so we need to rise as well. We're getting prepared for another brutal test.

"We know they're going to respond and so do we. We need to be better too."

(Reporting by Nick Mulvenney in Sydney, editing by Ed Osmond) 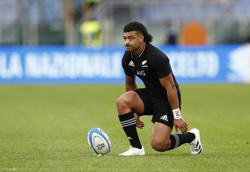