Rugby-Tompkins backs North to hit the ground running against Boks

JOHANNESBURG (Reuters) - Nick Tompkins expects battles all over the pitch when Wales face world champions South Africa at a sold out Loftus Stadium on Saturday, but one of the most fierce could be the match-up among the centres in the first of three tests this month.

Inside centre Tompkins will have yet another partner in the number 13 jersey as George North returns from more than a year on the sidelines with a knee injury.

They will be up against one of the most settled, and potent, pairings in world rugby in Lukhanyo Am and Damian de Allende, but Tompkins believes North will have no problem hitting his stride.

"He’s been brilliant, especially in training with some of the stuff he’s been doing," Tompkins told reporters on Friday.

"It looks like he’s not missed a beat. It's massively exciting to play alongside him. Hopefully he can take his chance, what he brings to the team is fantastic."

Tompkins has had a number of partners over the last few seasons of chopping and changing among the centres, but hopes now the team can settle on a first-choice selection ahead of the Rugby World Cup in France next year.

"You want to build up that rapport and get to know the person, how he attacks and defends," he said.

"That has been tough, but is part and parcel of where we are (as a team) with players retiring and so on. We need to get some consistency and build towards the World Cup."

Tompkins had a brief spell with Am at his English club Saracens, so knows what the Springbok brings on the pitch.

"The consistency (of selection) shows how good Am and De Allende are as a pair and what they have done together is brilliant," he said.

"It’s going to be a massive test for us to contain them with their attack, but also their defence. They are pretty sharp and aggressive." 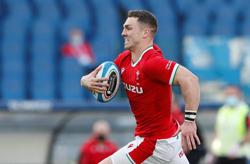