Rugby-With COVID-19 restrictions gone, rugby test is a sell out

CAPE TOWN (Reuters) - The first capacity crowd at a South African stadium since the COVID-19 pandemic is guaranteed for Saturday's test between the world champion Springboks and Wales, organisers said on Wednesday.

Just a week after restrictions on attendance at sports events in the country were lifted, some 52,000 tickets have been sold for the first test at Loftus Versfeld in Pretoria.

It will ensure the largest crowd to ever watch a test match between the Springboks and Wales on South African soil, said the Blue Bulls rugby union, who are hosting the international.

South Africa was subject to a severe shutdown at the outbreak of the pandemic some 27 months ago and restrictions on stadium attendance, as well as regulations on wearing face masks in public, were only lifted last Wednesday.

Sports events were closed to the public until last October, when limited numbers were allowed back into stadiums but only with proof of vaccinations or a negative PCR test.

A trickle of fans returned to domestic rugby matches, as well as cricket tests against India and Bangladesh, but the cost of policing spectators’ COVID status meant the domestic football league matches were closed to fans until April.

The number of spectators allowed into stadiums was increased to 50% of capacity in March with the Cape Town Stadium selling all 31,000 seats available for the United Rugby Championship final earlier this month when home side Stormers beat the Bulls.

It contrasted with the soulless emptiness of the same venue last year when all three tests between the Springboks and the British & Irish Lions were played behind closed doors in a surreal atmosphere as the players' shouting echoed through the venue.

"It feels different to last year with lockdown when we could not go out as much," Wales loose forward Josh Navidi told the BBC this week after his Lions experience last year.

"We only really saw the four walls of the hotel last year and it's nice to get out this time and enjoy a bit more of the culture," he added.

"To be able to have a capacity crowd after a period of over two years where spectators have not had the opportunity to fill sporting venues to full capacity is incredible," said Blue Bulls Company CEO, Edgar Rathbone. 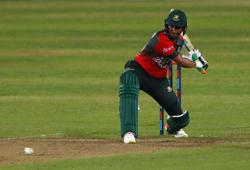