(Reuters) - Wales coach Wayne Pivac says no-one should write off his team's chances in their three test tour of South Africa, but concedes facing the bruising Springboks on the energy-sapping Highveld represents the "ultimate challenge" in world rugby right now.

Pivac's side will play tests on consecutive Saturdays from July 2 at almost 5,000 feet above sea level in Pretoria and Bloemfontein, before moving to Cape Town on the coast. Wales have lost all 10 previous matches in South Africa.

But he may point to his own team's shock home loss to Italy in their final match of the Six Nations in March for proof that major upsets are possible, even if the circumstances are quite different.

"If you write any team off in international rugby, you do so at your peril," Pivac told reporters on Tuesday. "It's the Welsh team that turns up on the day that South Africa has to deal with, and we hope it will be a good one.

"South Africa at altitude is probably the ultimate challenge. If we win one, two or three tests, it would be a success compared to what has happened in the past."

Pivac said the first two tests in particular are likely to be kicking duels and will come down to who performs best under the high ball.

"We have to make sure we give ourselves the chance in these games over the 80 minutes. At altitude there may be a bit more kicking because you want to play the game in the right area of the pitch," he added.

Wales have called on Scarlets prop Harri O'Connor as cover for Tomas Francis for the tour.

"Tomas has a niggle in his back, which has been a bit of a problem for him through the season, so we are just treating that with a bit of care, it's a precautionary measure," Pivac said.

"We have spoken to the guys at the Scarlets and they speak very highly of him (O'Connor) in terms of where he is at and where he can get to in the future. We think he can benefit from being a part of this trip." 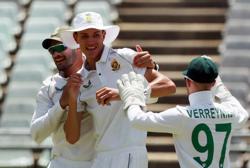