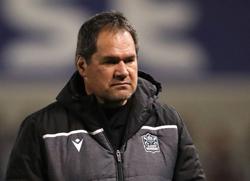 (Reuters) - Wallabies coach Dave Rennie on Monday urged Rugby Australia (RA) not to pull its teams out of Super Rugby in 2024 and set up a domestic competition of its own in the lead-up to hosting the 2027 World Cup.

In an interview with Australian broadcaster Fox Sports last week, RA chairman Hamish McLennan said Australia were committed to Super Rugby only as far as 2023.

"We'll honour our commitments in '23 but we need to see what's best for rugby in Australia leading up to the RWC (World Cup) in Australia in '27," McLennan said.

Rennie said that Australian teams playing their New Zealand counterparts would be beneficial for both countries.

"I've made it pretty clear in the past I think it's good for both countries that we play trans-Tasman footie," Rennie told reporters.

"I think the competition has been excellent this year and our sides have certainly been more competitive. It's good for them, it's good for us and I'd like to see that continue.

Australian media have reported that McLennan told New Zealand Rugby (NZR) chair Stewart Mitchell their partnership could end due to inequity in their broadcast revenues.

NZR reportedly earns A$89 million ($62.18 million) per year from broadcast rights for the tournament, while RA receive A$33 million from Nine Network and Nine's streaming platform Stan in a broadcast deal that expires at the end of 2023.

Australia's five teams competed in Super Rugby this year with six New Zealand-based sides and the Fijian Drua. Only one Australian team made the semi-finals.

Canterbury Crusaders beat the Auckland Blues 21-7 to win their 11th Super Rugby title in an all-New Zealand final on Saturday.

(Reporting by Aadi Nair in Bengaluru, editing by Ed |Osmond)