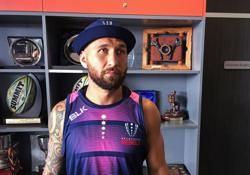 SYDNEY (Reuters) - The race for the last spot in the knockout rounds and the lure of a home quarter-final should ensure the final round of the Super Rugby regular season is anything but a damp squib despite much of the playoff picture already being clear.

A generous format that allowed eight of the 12 Super Rugby teams into the playoffs always promised to take the regular season down to the wire, and so it has proved.

Despite a 3-10 win-loss record, Western Force go into their final match against Wellington Hurricanes on Saturday with a chance to leapfrog the Otago Highlanders and make the cut.

Bonus points, available for winners and losers, could come into play with the Force needing to finish clear of the Highlanders before any tie-breakers because of their miserable points aggregate of minus 122.

The Hurricanes will travel to Perth without coach Jason Holland and All Blacks back Jordie Barrett, who have both been hit by a flu bug that has ripped through the squad.

The eight-team playoff format was widely regarded as a way of ensuring more than token Australian representation after their five teams managed only three wins from 25 contests against New Zealand opposition last season.

A like-for-like comparison this season -- discounting New Zealand-based expansion team Moana Pasifika -- has Australia on five wins from 21 matches and the Force and Rebels are not the only sides keen to bolster that tally this weekend.

The Queensland Reds, Australian champions last year, have secured a playoff spot without beating any of the traditional New Zealand teams and will be desperate to build some momentum ahead of the playoffs.

They take on the Canterbury Crusaders on Friday and a slip up from the 10-times Super Rugby champions in Christchurch could see the ACT Brumbies sneak into second place with a big win over Moana in Auckland on Saturday.

The sixth-placed New South Wales Waratahs could yet snatch a place in the top four and a home quarter-final, but they will need to beat the Auckland Blues in Sydney and hope the Hurricanes and Waikato Chiefs both lose.

The Blues have changed all but one of their starters from the side that sewed up top spot in the standings last week with a last-gasp win over the Brumbies.

A Waratahs victory would have been unthinkable a year ago when they were slumping to a winless season but the 2022 outfit will be confident of beating a second-string Blues side.

The fourth-placed Chiefs have, by contrast, named their best available team for the trip to Lautoka to face Fijian Drua in only the second proper home match of the season for the expansion team.

"It's a simple equation for us," said Chiefs coach Clayton McMillan. "Get the win and we can go home to play in front of our fans for the quarter-final."