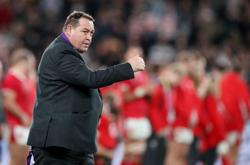 (Reuters) - World Rugby said on Wednesday they presently "do not wish to explore" the concept of the new World 12s tournament after a consultation with key stakeholders of the sport.

The 12-a-side tournament, chaired by former Rugby Football Union chief executive Ian Ritchie, was launched in September with the aim of bringing $344 million into the sport over the next five years.

"World Rugby has shared the views of national unions, international and domestic competitions to the group proposing World 12s and confirmed that stakeholders do not wish to explore the concept further at this time," a World Rugby spokesperson said in a statement.

"This is a position endorsed by the World Rugby executive committee and professional game committee, which includes representatives from across the elite men's and women's game.

"The priority for the sport is advancing productive discussions regarding the establishment of a welfare-focused, streamlined and harmonious international calendar."

The inaugural World 12s men's tournament is scheduled to take place in August 2022 in England, while the women's competition will kick off the following year to prevent it from clashing with the women's World Cup, which has been pushed back by a year.

"World 12s has been, and continues to be, in regular contact with World Rugby," said Rowena Samarasinhe, who was appointed the tournament's chief executive earlier on Wednesday.

"We are optimistic that, even within the restrictions posed by the current calendar, World 12s will be able to host a tournament in August 2022 that includes a number of the game's leading players, who will not be impacted by fixture clashes at that time."

(Reporting by Dhruv Munjal and Hritika Sharma in Bengaluru, editing by Pritha Sarkar)