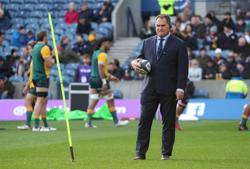 (Reuters) - The Wallabies return to the site of their humiliating exit from the last World Cup on Saturday to take on a Japan side eager to prove their own rousing 2019 campaign was no fluke.

Australia's 40-16 quarter-final loss to England at Oita Stadium brought an end to a chaotic campaign and turned out to be the final match of Michael Cheika's reign as coach.

His replacement Dave Rennie had a moderate first year in charge but has overseen six wins in 10 tests this season, with three of the losses coming against the All Blacks.

Four straight wins, including back-to-back victories over world champions South Africa, have triggered an upsurge of interest in the Wallabies in Australia.

Rennie, though, is wary of the threat posed by a Japan team coached by Jamie Joseph, who he knows well from the days when they ran rival Super Rugby teams back home in New Zealand.

"We're going to have to do a good job around the quality of our defence and slowing their ball down to get a wall in front of them. It should be a belter."

Cheika's Wallabies thrashed Japan 63-30 in their last meeting in Yokohama in 2017 to maintain a 100% record in five tests against the Brave Blossoms.

Rennie largely kept faith in the squad that won the four straight games with only a couple of enforced tweaks in the absence of injured centre Samu Kerevi and winger Marika Koroibete, who decided not to tour.

Quade Cooper will again start at flyhalf and Rennie will be confident his young backline will be able to meet fire with fire when it comes to running rugby.

Japan have only played two matches since their fairytale run to the quarter-finals of the 2019 World Cup on home soil and Joseph selected a side with a youthful, Australian tinge for Saturday's clash.

Jack Cornelsen, the son of Wallaby Greg, will team up with James Moore in the second row, while Ben Gunter wins his first cap in the back row and uncapped winger Dylan Riley will be hoping to make his debut off the bench.

"It's a great opportunity to put them up against their countrymen," Joseph said on Thursday. "I'm expecting great performances from them.

"We've got a plan that if we can execute, we think can win us a test match."