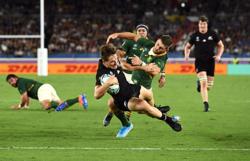 CAPE TOWN (Reuters) - Poor discipline cost South Africa and they lost the game in the air as they let slip a nine-point halftime lead over the British & Irish Lions in Saturday’s first test, home coach Jacques Nienaber said after the 22-17 defeat.

The Springboks had looked in command in the first half and were 12-3 ahead at the break, during which Nienaber said he emphasised more on discipline.

But despite his instructions the world champions gave away four second half penalties to allow the Lions to claw back the deficit and win the game.

"I thought our discipline was not great in the second half and the sad thing is that we actually highlighted that at halftime. We said we had to make a step up there but we didn’t," Nienaber said.

He also said the Lions proved superior with their kicking game.

"In the second half we lost it in the air. I thought we got the rewards in the first half but in the second half they dominated the air and that gave them territory, broken play and we had to scramble from that," he added.

"But we did get over their try line three times in the second half but unfortunately twice we got brought back (after TMO reviews), which were the right calls. That’s how close it was, the margins were just inches."

Nienaber, in only his second game as coach, said they had expected an aerial barrage, which was as good as they attempted to give.

"We knew the kicking game was coming and we had plans to deal with it. It worked well in the first half but then things didn’t go to plan in the second half. Our execution wasn’t as good as it should have been," he added.

Nienaber refused to blame the COVID-19 outbreak that hampered the home side’s build up to the test as a reason for the loss.

"It’s well documented that we haven’t played a lot of rugby together and it would be naive to suggest it didn’t impact our cohesion but I don’t we can use that as an excuse," he said, insisting his side had the potential to bounce back in the next two tests. Rugby-Hodge starts, O'Connor back on the bench for settled Wallabies
Rugby-World Rugby recommend maximum 15 minutes full contact training per week
Rugby-All Blacks bring back big guns for Springboks test
Rugby-De Klerk urges Boks to go back to their 'DNA' in All Black clash
Rugby-All Blacks and Boks meet for 100th time in increasingly one-sided rivalry
Rugby-Cox set to become first woman to officiate Premiership game
Rugby - Wiese citing dismissed, but too late for selection v All Blacks
Rugby-De Jager back as Boks bolster bench with backline experience
Rugby-Lynagh in England squad, no place for Ford or Vunipolas
Rugby-Wallabies must back up Springbok wins, say young guns