Rugby-Vermeulen to help Boks beat Lions, on or off the pitch CAPE TOWN (Reuters) - South African remain hopeful over the fitness of Duane Vermeulen for the British & Irish Lions series, with assistant coach Deon Davids suggesting on Wednesday the number eight was a "couple of weeks" away from joining the squad.

Davids was coy on whether the burly forward would be available to play in the series, but said if he not he will be a mentor to others in the squad.

"We expect him to join our group in the next couple of weeks and we are looking forward to having him as part of our squad – whether his contribution will be off-field or on-field. We would like him to share his experience with us in our preparations going forward," Davids told reporters.

Vermeulen injured his ankle playing for the Bulls in a domestic competition on June 4. He has since had surgery and faces a race against time to be fit for the start of the three-test series against the Lions on July 24.

Of most immediate urgency in his position is a July 2 test against Georgia in Pretoria, which will be followed by a second game against the same opponents a week later, the first matches for the Springboks since they lifted the Rugby World Cup in November 2019.

"We have Kwagga (Smith), there’s also a new guy like Jasper Wiese that will come in. Dan du Preez has played Tests for South Africa and has been in outstanding form – he had a great game last weekend (for English side Sale Sharks)," Davids said.

The Boks are also facing an anxious wait to see if locks RG Snyman and Lood de Jager, and centre Damian de Allende, will be fit to face Georgia.

"All the (outstanding) players are coming in on Sunday, the overseas-based players from the UK and France. A thorough assessment medically will be made in terms of where they are, and then we will make a decision from there on," Davids added. 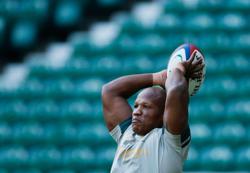