LONDON (Reuters) - Warren Gatland has included four Scottish players in the British and Irish Lions team to play Japan at Murrayfield on Saturday, the first preparation match for this year's tour of South Africa.

Winger Duhan van der Merwe, props Rory Sutherland and Zander Fagerson and flanker Hamish Watson all start, while Scotland scrumhalf Ali Price is on the bench for the game that will be watched by 16,500 fans - likely to be the only sizeable crowd the Lions will see for the whole tour.

The Edinburgh fans will be delighted to have so many Scots to cheer on after they have been something of a sideshow for the Lions for a long time. The last Scot to start a Lions test was prop Tom Smith in Australia 20 years ago.

The Lions have been preparing in a training camp in Jersey, though they are still without four Exeter players who will play against Harlequins in the Premiership final on Saturday.

"I’m pleased with the progress we’ve made but we’ve along way to go," Gatland said. "You can see that the squad are starting to get to grips with our game strategies, but, as always with a Lions Tour, this takes time to bed in.

"Everyone in the squad will get a start before the start of the test series, so each member of the squad can put their hand up for test selection.

The Springboks have not played a game since beating England in the World Cup final in 2019 and will warm up for the series with tests against Georgia.

(Reporting by Mitch Phillips, editing by) 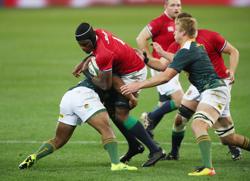