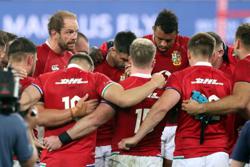 (Reuters) - USA Rugby named its squad for the women's Olympic rugby sevens on Thursday, with two veterans from the Rio Games among those hoping to bring home the Stars and Stripes' first-ever Olympic medal in the event.

The team lost in the quarter=finals in 2016, the first year the event featured in the Olympics, and is ranked sixth by World Rugby, after finishing fourth in the 2018 Rugby World Cup Sevens.

Alev Kelter, 30, who has 33 World Series appearances under her belt, and winger Lauren Doyle, also 30, bring Olympic experience to the squad.

"We have enough big match experience from the last three years to fully trust and believe that when we focus on the task at hand, play with discipline and fight as a collective, we are extremely hard to handle," head coach Chris Brown said in a statement.

"We will be exactly where we need to reach the podium."