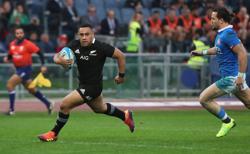 WELLINGTON (Reuters) - New Zealand Rugby (NZR) has warned that the intensity of the domestic Super Rugby Aotearoa competition is not sustainable after All Blacks midfielder Jack Goodhue was ruled out for the entire 2021 season with a serious knee injury.

The last two weeks of the bruising, five-team competition has taken a heavy toll, with Canterbury Crusaders' Goodhue joining All Blacks captain Sam Cane and loose forward Ardie Savea on the sidelines, while prop Joe Moody is also under an injury cloud.

"We don't want to read too much into two weeks but we know that playing that standard and intensity of rugby year on year is not really sustainable for our players," NZR Professional Rugby and Performance boss Chris Lendrum told local radio station Gold AM.

"As a competition, as fans we love it, right?

"But we're looking forward to a more balanced programme for those players next year where we have Australian teams in the mix and hopefully these Pasifika teams in the mix, so you're not watching All Blacks trials every weekend."

The five-team Aotearoa was launched last year to fill the void after the broader Super Rugby competition, which featured Australian and South African teams and one Argentina-based side, was abandoned due to the COVID-19 pandemic.

Goodhue, who was starting centre in five tests last year, ruptured an anterior cruciate ligament in his left knee during the tight win over the Wellington Hurricanes at the weekend, the Crusaders said on Thursday.

Moody is sidelined indefinitely after scans confirmed a "significant injury" to the soft tissue at the base of his big toe. He will see a specialist in two weeks' time.

Waikato Chiefs co-captain Cane, who had surgery on a torn pectoral muscle this week, will miss at least the July tests against Italy and Fiji, while Hurricanes skipper Savea is out for up to eight weeks with a torn knee ligament.

All Blacks scrumhalf Aaron Smith questioned whether organisers had provided enough rest weeks for players to recuperate. The teams are given two bye weeks in the 10-round competition and play no more than four games in succession.

"Last year we had a lot of chat around player welfare, making sure the byes were set up well, and I feel like this year they’ve just sort of flunked it and said, ‘Oh well, go out there and do it’," Smith told local reporters.

"It's come home to roost in the last few weeks with a lot of injuries and some of them are guys walking off with season-enders.

"That’s rugby, it does happen. But the brutality, the intensity of the games and how much is on the line with playoff spots, it’s brutal."