MELBOURNE (Reuters) - The Western Force scored a late try off a rolling maul and held off the Melbourne Rebels in a dramatic finish to claim their second win in Super Rugby AU on Friday, with the 16-15 victory keeping alive their hopes of making the playoffs.

The Rebels looked to have won an ugly arm-wrestle of a match until the Force's replacement forward Tim Anstee crashed over the line from an attacking lineout to score the first try of the match with four minutes left on the clock.

Argentina flyhalf Domingo Miotti converted to give the Force a one-point lead, but they had to defend it with their lives as the Rebels came back at them to try to snatch a win that would have all but assured them of the third and final playoff spot.

The Force pack, who were hard on the ball at the breakdown throughout the contest, forced a turnover after the final hooter but fullback Jack McGregor's attempted kick into touch was intercepted and the Rebels twice set up for drop goals.

On the first attempt, the pass failed to reach Reece Hodge in the pocket and on the second the fullback skewered his kick well wide of the posts, bringing an end to the contest.

It was another in a series of disappointments for Hodge, who missed three potentially match-winning penalties for Australia in tests against New Zealand and Argentina (twice) last season.

The rest of the contest was forgettable as Matt To'omua kicked four penalties and Hodge one for the Rebels, while Miotti replied with three for the Force.

The victory brought the Force within a point of the Rebels in the battle for third place, with two rounds of the regular season remaining.

Runaway leaders Queensland Reds and ACT Brumbies meet in a top-of-the-table clash in Brisbane on Saturday.

(Reporting by Nick Mulvenney in Sydney, Editing by Hugh Lawson) 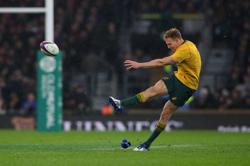