Christian group launches campaign to get Folau back into NRL

SYDNEY (Reuters) - The Australian Christian Lobby has launched a media campaign calling for international rugby player Israel Folau to be allowed to return to the National Rugby League (NRL).

Folau, who has played all three of Australia's major oval ball codes professionally, was sacked by Rugby Australia in 2019 over social media posts deemed homophobic by the rugby union governing body.

A return to the NRL with the St George Illawarra Dragons was scuppered in February after news of negotiations sparked a backlash from LGBT rights groups, some fans and sponsors.

The Australian Christian Lobby placed a full page advertisement in Sydney's mass circulation Daily Telegraph on Monday calling for the 31-year-old to be able to return to the league where he started his career.

"Those at the top want to punish him forever – even though they allow others to play who have criminal charges and atrocious personal conduct," read the advert, which urged fans to contact the NRL. "This double standard is wrong!"

Australia's rugby league chief Peter V'Landys said Folau would be treated like any other player and the issue of him returning to the NRL was academic until a club made an application to sign him.

"This Christian Lobby with their full-page ads basically are wasting their resources and money because there is no application," he told local media.

"Any player has to have a contract with a club and the necessary registration application to go with it. We have neither of those."

Folau, a fundamentalist Christian, had his Wallabies and Super Rugby deals terminated in 2019 after he posted a meme that said hell awaited "drunks, homosexuals, adulterers" and others.

He took legal action against Rugby Australia demanding A$14 million ($10.73 million) in compensation but the case was settled out of court with Folau receiving an undisclosed sum.

He played for one season in France with the Catalan Dragons but before quitting the Super League club and returning to Australia with his family at the end of last year. 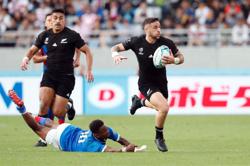