(Reuters) - Having a standalone Six Nations this year is a great opportunity for women's rugby to step out from under the usual shadow cast by the men's version of the tournament, England centre Emily Scarratt has said.

The women's Six Nations - which traditionally takes place alongside the men's event - was set to start on Feb. 6, but was postponed because of the COVID-19 pandemic.

It will now begin on the weekend of April 3-4 and end on April 24, employing a condensed format similar to last year's men's Autumn Nations Cup.

"We've got a huge opportunity to play a sport, not competing against the men and their kick-off times," Scarratt, who has 92 caps for the Red Roses, told Reuters.

"It's exciting that you don't have to share the sponsors and media channels. This kind of Six Nations is a litmus test."

Teams will be divided into two groups - Pool A comprising England, Italy and Scotland and Pool B made up of Ireland, Wales and France. They will play one match at home and another away, with the pool winners meeting in the final.

England prop Shaunagh Brown said she and her team mates were fine with their tournament being postponed.

"Most international women rugby players... have to go to work in between camps or take an awful lot of time off work, not being paid, to go to camps," said Brown, who has also represented England in athletics in the hammer throw event.

"It would be unfair for players to have a block of six to eight weeks in the camp when it's not their full-time job. This tournament will be a challenge... I believe it's going to be a better Six Nations for women's rugby."

"What we saw during the pandemic, it's all about finances and investment. We see the men's game... the reality is it brings in more money," Alphonsi said.

"There was a huge effort to get the men's Premiership back running and same with their international fixtures as well.

"Women's rugby has been impacted nonetheless and the key here is making sure all governing bodies are supporting their women's teams and focus on getting internationals back."

Hopes for a women's British and Irish Lions tour were boosted this month after Royal London, Britain's largest mutual life, pensions and investment company, said it would fund a feasibility study into the idea.

Scarratt, the 2019 World Player of the Year, said the women's Lions should play against the best teams in the game instead of facing the same opponents as the men.

"It can't be a carbon copy of the men's tour," she said. "For the women, you look at maybe Canada and the Americas."

The women's World Cup in New Zealand has also been pushed back a year to 2022.

"You've got an extra year to work on things, to be better," Scarratt said. "You want to play in front of the biggest crowds and if delaying it by year means that can happen, we'll roll with it." 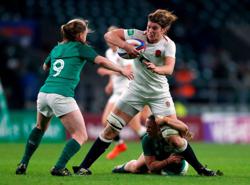