PARIS (Reuters) - France coach Fabien Galthie has kept faith with his starting lineup as they face Wales in a pivotal Six Nations clash on Saturday a week after their last-gasp defeat by England.

Wales will claim the Grand Slam if they win in Paris, while France must beat them, and Scotland in their rescheduled game, and grab at least a bonus point to win the title.

"We want to exploit the potential of this starting line-up to its fullest and improve their strength, talent and savoir-faire," Galthie told a news conference on Thursday.

Matthieu Jalibert will start again at flyhalf alongside Antoine Dupont after a sterling performance at Twickenham, where Les Bleus lost 23-20 after conceding a late try.

Romain Ntamack, Dupont's usual partner, was back from injury last weekend but did not play and Jalibert's display means he is selected again.

"We chose him for a simple reason, he was excellent against England," said Galthie. "He was solid, he kicked perfectly and performed well in the way he managed the game against very tough opposition."

Galthie added that Ntamack and Jalibert being so close in the pecking order was an asset for France, rather than a problem to solve.

"We are very satisfied with these two players. This emulation helps them both improve," he said.

France were 20-16 up against England with four minutes left and after Galthie opted not to use several replacements - scrumhalf Baptiste Serin, Ntamack, flanker Anthony Jelonch - they succumbed to the pressure.

Galthie said it was the wrong debate.

"There were moments before (the last four minutes) where we should have taken better advantage of some situations to increase our lead or not concede points," he explained.

"We're also a young team. We are learning, we are in development."

Galthie added that France's two victories against Wales last year would count for nothing on Saturday.

"They won the championship in 2019 and reached the semi-finals of the World Cup, where they only lost to (eventual champions) South Africa," he said.

"They have a strong collective experience with a squad averaging 60 caps per player, and they showed how they were able to bounce back after a difficult 2020. And they lead the standings. For now. But I insist: for now." 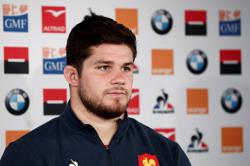