Mighty Saracens cut down to size by Cornish Pirates (Reuters) - Saracens' bid for what was widely assumed to be a near-automatic immediate return to the English Premiership suffered a stunning setback on Saturday when they were beaten 25-17 by Cornish Pirates in their first game of the Championship season.

Although the majority of their international players were absent, they still fielded a team boasting 165 test caps - including South Africa's World Cup-winning prop Vincent Koch. That was widely considered to be more than good enough for them to begin their campaign with a straightforward victory at the Penzance ground they last visited in 2003.

Saracens led 17-15 early in the second half after tries for current and former Scotland internationals Sean Maitland and Tim Swinson and one for Alex Lewington.

The Pirates, however, playing their first competitive home game for over a year, were always in the game through tries by Tom Duncan and Dan Frost and the goalkicking of Luke Scully and they deservedly took the prized scalp when Rhodri Davies touched down after a superb counter-attack.

Saracens have plenty of time to get back on course in the shortened two-conference Championship season which culminates with a two-legged playoff to decide who goes up, but they may want the likes of Owen Farrell, Maro Itoje and Jamie George back in club colours more quickly than they might have imagined. 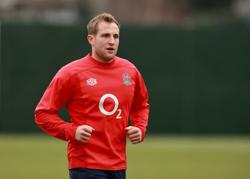