Rugby League: Salford to use microchipped mouthguards to monitor collisions 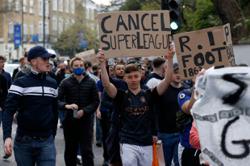 The system, designed by Welsh company Sports & Wellbeing Analytics, will send data to pitch-side coaching and medical staff in real-time.

Concussions and their long-term effects have been in the spotlight since former players filed a lawsuit against governing bodies World Rugby, England's Rugby Football Union and the Welsh Rugby Union which alleged a failure to protect them from the risks.

Salford director of rugby and operations Ian Blease said in a statement https://www.salfordreddevils.net/salford-become-pioneers-of-player-welfare-following-groundbreaking-partnership-with-protecht player welfare was of utmost importance to the club.

"The effects on players from rugby collisions alone is an area of research that is gathering pace ... and for Salford to be at the forefront of this research is an extremely important addition to our own research and development programmes," said Blease.

Salford will become the first rugby league club to implement the system, though it is already in use at rugby union's Premiership clubs Leicester, Gloucester and Harlequins.