(Reuters) - Flyhalf Adam Hastings will return to Scotland's squad for Sunday's Six Nations game against France following a shoulder injury, while backrow Josh Bayliss has been called up for the first time, Scottish Rugby said on Sunday.

Uncapped Bayliss has been included in the squad after qualifying for Scotland through his Aberdeen-born grandmother.

"We welcome Josh into our squad as we look to build on our opening two games of the Championship," head coach Gregor Townsend said in a statement https://www.scottishrugby.org/news/scotland-squad-update-france.

"We have been following his performances with Bath and a combination of his form and a couple of injuries in our squad have given us the opportunity to involve him for the first time."

Scotland will be without centre Cameron Redpath and backrow pair Gary Graham and Blade Thomson, who have all returned to their respective clubs due to injuries.

Prop Zander Fagerson will also miss the game, with Scottish Rugby set to appeal his four-match ban following his red card in their 25-24 loss to Wales on Feb. 13.

Scotland, who won against England in the opening match before losing to Wales, are fourth in the Six Nations standings with five points. 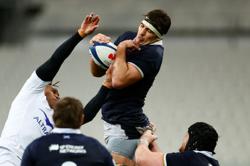