PARIS (Reuters) - Five more France rugby players have tested positive for COVID-19, bringing the number of infected players to 10, with Six Nations officials set to meet on Wednesday to decide if the team's match with Scotland on Sunday can go ahead as planned.

The players who tested positive have been replaced in the 31-man squad which is due to return to training on Wednesday, the FFR said.

Six Nations officials said over the weekend they were confident the game in Paris would go ahead. But organisers said on Monday their Testing Oversight Group reviewed the situation and would reconvene on Wednesday.

"Should the decision be that the fixture cannot go ahead, the match will be rescheduled for the earliest possible date," organisers said in a statement.

"Ensuring the health and safety of all players and staff is our number one priority."

France lead the standings with two wins from two games, ahead of Wales on points difference, as they seek to lift the Six Nations title for the first time since 2010.

Such is the depth of the squad that they should still be able to put out a strong side in Paris, where they have not lost to the Scots for 22 years.

Due to an availability conflict with their clubs, France fielded a virtual third team in last year's Autumn Nations Cup final against England and came within seconds of victory before losing to a sudden-death penalty in extra-time. 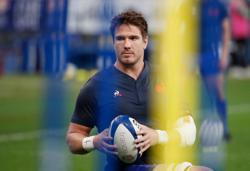