TOKYO (Reuters) - Kobe Steelers, the most recent winners of Japan's Top League, said on Thursday 10 people at the club had tested positive for the novel coronavirus, the latest setback for the domestic rugby union competition due to start this weekend.

In a statement on their website, Kobe said they had "instructed all team members, including those who are negative, to wait at home" since Tuesday, which was when the positive tests were confirmed.

The matches involving Toyota, Suntory and Canon scheduled to be played this weekend have already been cancelled by the Japan Rugby Football Union (JRFU).

Kyodo News Agency on Thursday reported that sources close to the JRFU have said the start of the season would be delayed because of the outbreaks.

The JRFU will hold a news conference on Friday.

The JRFU said last week that games would be played in front of thousands of fans who had already purchased tickets, despite government guidelines limiting the number of people allowed to attend sporting events.

Last year's Top League season was cancelled entirely because of the pandemic. 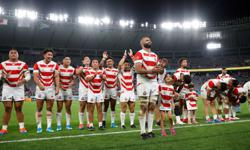