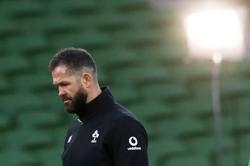 DUBLIN (Reuters) - A lacklustre Ireland beat Georgia 23-10 on Sunday to wrap up the group stages of the Autumn Nations Cup in a Pool A finale that was academic for the standings but which coach Andy Farrell said was not good enough.

The hosts could manage only three second-half points in a day brightened up by Georgia's first points of the tournament when Giorgi Kveseladze's 16th-minute try prompted wild celebrations and a pile-on from the visiting replacements.

"It's not good enough. All credit to Georgia but we need to have a long, hard look at that second 40 (minutes)," Farrell said in a pitchside interview, conceding that his side got a deserved "hiding" at the breakdown in a dreadful second half.

Only a hugely unlikely 29-point Georgia win would have cost Ireland a third-fourth place finale against Pool A runners-up Scotland and they initially looked sharp when Billy Burns crossed over early, aided by some delicate Chris Farrell hands.

Starting for the first time after impressing off the bench in last week's loss to England and the opening win over Wales, flyhalf Burns passed the audition to act as likely Six Nations backup to captain Johnny Sexton with a try and 10 points from the boot in an afternoon cut short by injury.

Kveseladze's response seven minutes later was worthy of the celebrations that followed after an equally delicious pass from Soso Matiashvili let the centre jink his way over from halfway.

Ireland's lineout, so poor of late, was better but rarely tested. The scrum was not great, even as ever-present November starter Andrew Porter emerged as arguably Ireland's player of the tournament with his 40-minute shift.

But the significant dip in performance after Hugo Keenan's try before halftime -- his third in five tests since his debut last month -- will be of huge concern to Farrell.

Jacob Stockdale had another very mixed day in his relatively new spot at fullback as Ireland's search for a long-term replacement for Rob Kearney goes on but the mistakes were widespread in the second half.

The Georgian roars grew louder in the empty Aviva Stadium at each turnover and the world's 12th-ranked side's physical endeavours probably deserved more than just a second-period Tedo Abzhandadze penalty.