Rugby: Italy scrum half Braley misses out against England

ROME (Reuters) - The return of fullback Matteo Minozzi is the only change to Italy’s starting lineup for their Six Nations clash against England at Rome’s Olympic Stadium on Saturday, coach Franco Smith announced on Thursday.

Minozzi missed last Saturday’s 50-17 defeat in Ireland because he was playing for Wasps in the English Premiership final against Exeter Chiefs.

Smith kept faith with 20-year-old flyhalf Paolo Garbisi, who scored 12 points on his debut last week, including a try.

“In Ireland we showed flashes of our potential and positive signs, but we are aware that we have a lot of work ahead of us,” said Smith as he named the side.

“We are a young team that wants to progress and continue to build an identity,” he added.

Italy, already condemned to bottom place again, have lost their last 26 Six Nations matches, stretching back five years and meet an England side who will be seeking a bonus point haul to put themselves in line to take this year’s title. Rugby: Italy scrum half Braley misses out against England 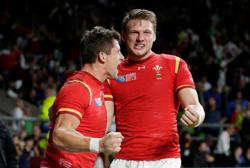