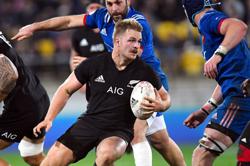 SYDNEY (Reuters) - Argentina have had to postpone their Rugby Championship warm-up against a New South Wales Waratahs XV as several players in the squad are nursing injuries, the Pumas said.

Argentina, who were released from a bio-secure facility in Sydney earlier this week, are keen to get some gametime before opening their campaign against the All Blacks on Nov. 14.

However, they said on their website that Jeronimo de la Fuente, Lucas Paulos, Jose Luis Gonzalez, Santiago Grondona and Tomas Lezana were among several players needing to rest.

Juan Martin Gonzalez was suffering discomfort in his left adductor muscle and would be monitored by medical staff, the team added.

A total of 13 players are still in isolation having only arrived from Europe earlier this week.

The Pumas were hit by a wave of COVID-19 infections before they left for Australia, with more than a dozen players and coaches testing positive.

The majority of the team arrived in Sydney in early October and spent two weeks in isolation.

(Reporting by Greg Stutchbury in Wellington; Editing by Peter Rutherford)