Australia left to deal with financial hit from Springboks withdrawal

Umaga hopeful for Pasifika team as squad named for match

SYDNEY (Reuters) - Rugby Australia were stunned by South Africa's withdrawal from the Rugby Championship but are confident they can deal with the financial hit stemming from their absence, chairman Hamish McLennan said on Wednesday.

South Africa Rugby pulled the world champions out of the southern hemisphere competition last week citing concerns over player welfare, leaving a rump three-nation tournament and a hole in the finances of hosts Australia.

"We'll find a way through it," McLennan told reporters at the launch of Australia's indigenous jersey.

"We were surprised because South Africa did agree to the tournament and the scheduling so we were disappointed that they pulled out.

"It will cost us quite a lot of money but we'll find a way through it ... we've proven so far that we're a pretty resilient organisation."

McLennan said there was no question of any claim for compensation against the South Africans but did question the wisdom of pulling out.

"I think it was obvious that (the competition) was good for everyone," he said.

"If you look at South Africa, their top players won't have played test rugby for 20 months when the (British and Irish) Lions come through next year.

"We would have given them ample time to prepare for the tests, we've already got the Argentinians out here at the moment and they are quite satisfied with how their preparations are going.

"So we were a little perplexed but we'll have to move on ..."

The 54-year-old was confident the Rugby Championship would be back to full complement next year and said planning for Super Rugby in 2021 was continuing apace with discussions over some crossover competition with New Zealand teams.

"We're still looking at a domestic competition with a (post-season) crossover but again we're trying to pin our Kiwi friends down so hopefully we'll have an idea of how that looks over the next month or so," he said.

RA was still open to a joint competition with New Zealand next year, McLennan added.

"We have to continue to form an ANZAC block, I think it's very powerful on the global stage," he said. "We'll be better players if we play Kiwi sides every week and it's what the broadcasters and fans want.

"There's no stumbling block from our side so it's up to New Zealand to decide what they want to do."

McLennan has butted heads with New Zealand Rugby several times in his short period as RA chairman and laughed when he was asked how relations were between the two unions.

"They're getting better every day," he grinned.

Umaga hopeful for Pasifika team as squad named for match 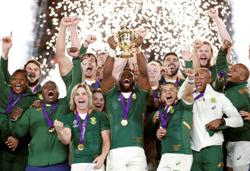