PETALING JAYA: A month-long training stint in South Korea paid off for young C. Sree Abiraame (pic) as she wowed judges in the Skate Asia 2022 competition.

The 10-year-old with the beaming smile won gold and bronze in two separate categories in the competition at the Sunway Pyramid Skating Rink from Aug 6-14.

In the Under-11 artistic freestyle, she bagged the gold, with Alexandra Myakinna finishing second.

To prepare for the competition, Sree trained in South Korea last month to improve on her technique and grace.

“Sree was at Triple K Academy in Suwon, South Korea, for her skating skill progress analyst. She was trained by professional coaches from Korea, and we could see progress,” he said.

“As a parent, I am happy to see her working hard towards her goal. She works hard to be better, and we are always there to support her.”

He revealed that Sree had received an offer to train in the United States, but they were still considering it due to financial challenges.

“She received an offer letter from the Boston skating club for three years of training.

“But we’re unsure if she can go due to financial challenges. We are looking for training stint alternatives for her.

“Her vision remains the same, which is to make it to the Winter Olympics.

“She had already met one target, winning the Tallinn Trophy 2021 Under 11 category in Estonia in November.

A three-year plan has been drawn up for her, starting from September. 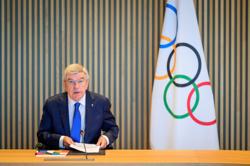