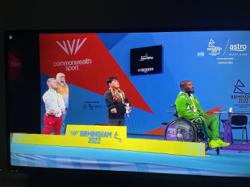 BONNIE Bunyau Gustin almost wanted to give up powerlifting one year after picking up the sport because he failed to get the desired result.

Thankfully, he heeded coach Jamil Adam’s advice to stay patient and give himself another year.

And Bonnie has now added the Commonwealth Games gold to his collection that also includes two world and one Paralympic titles.

The 23-year-old smashed the Games record three times en route to taking the men’s lightweight (below 72kg) gold for Malaysia at the National Exhibition Centre on Thursday.

It is the country’s fourth gold in Birmingham and Bonnie became the first Malaysian para athlete to win in Commonwealth Games history.

Bonnie started with 210kg and was also successful in his next two tries at 216kg and 220kg respectively.

He was declared the winner to shouts of joy from the Malaysian supporters at the venue, setting a new Games record of 154.6 points.

England’s Mark Swan put some pressure on the Malaysian but had to concede defeat.

The host nation’s representative produced his best effort of 202kg to take silver with 145.5 points ahead of Nigeria’s Innocent Nnamdi, who took bronze with 132.5 points.

Medals won in para sports count in a nation’s medal tally at the Games.

Bonnie is also the first powerlifter who is not from Nigeria to win since the sport was introduced in the Games in 2002.

But breaking records was not what he set out to do in the first place.

“I just want to contribute to the Malaysian contingent in my second Games appearance.

“I had discussed and agreed with my coach on the weight to set for my three attempts today.

“We felt it would be enough to secure the gold. If I had attempted a heavier weight, I may not feel comfortable as I have a slight shoulder injury.

“This gold medal is for all Malaysians who prayed and wished me well today.

“Now, I have gold medals from all major Games except the Asean Para Games,” he said in jest.

“I dropped out of school and I had nothing to do, so my father asked me to try the sport out as he was a national powerlifter before.

“I did not see any result at first and I wanted to stop but my coach persuaded me to continue and work harder,” said Bonnie, who holds the world record of 230kg in his weight category.

Bonnie had already chalked up a first for the para athletes community last weekend when he had the honour of carrying the national flag in the opening ceremony alongside woman squash player Aifa Azman.