Awesome Aaliyah can jump for joy!

The sky’s the limit: Aaliyah Yoong Hanifah has chalked up a new national record in the girls’ jump event in waterskiing at the Moomba Masters Championships in Melbourne.

KUALA LUMPUR: Teenager Aaliyah Yoong Hanifah has bettered the national record for the girls’ jump event in waterskiing at the Moomba Masters Championships 2022 in Melbourne, Australia.

The 18-year-old recorded a jump of 39.5m to come out tops and advance to round two in the junior category today. 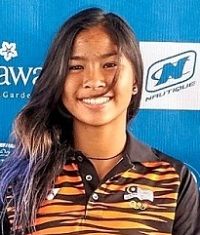 “Awesome jump from Aaliyah Yoong, who chalked up a new Malaysian record and a new PB (personal best) with 39.5m, eclipsing her previous best of 38.9m achieved three years ago at Latrobe (also in Melbourne),” her father-cum-coach, Hanifah Yoong posted on his Facebook page.

Aaliyah also came in first in the tricks event with 5,030 points but could only finish fourth in slalom.

“The Yarra (River) is tough! Many fell victim to the strong winds this morning and slalomed far from their best, including me. But I’m happy to finish fourth as I was seeded only eighth, so I will start at a better position in round two tomorrow,” said Aaliyah, who is making her 10th appearance in the championships.

At the Moomba Masters Championships 2020, Aaliyah bagged a gold in the tricks event of the girls’ Under-17 category as well as silvers in jump and girls’ overall. — Bernama