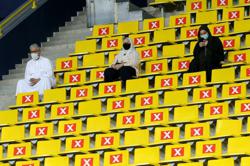 Hakuho, 36, made his sumo debut in 2001 and fought his way up to the top rank of yokuzuna in May 2007, becoming the second Mongolian native to hold that rank.

NHK quoted sources as saying Hakuho had firmed up his intention to quit and that he would be taking the necessary steps to run a sumo "stable," where wrestlers live and train.

Hakuho, who gained Japanese nationality in 2019, a prerequisite for opening a stable, has said that training wrestlers would be a "way of showing my gratitude".

The Japan Sumo Association said it had no comment to make on the report.

Hakuho, born Monkhbatyn Davaajargal, broke records for tournament wins and the number of bouts won in a calendar year, and his tenure as yokozuna was also the longest in sumo history.

But injuries hampered his career over the past few years and he dropped out of several tournaments sat out others altogether.

In July he won a tournament in Nagoya but said at the time, "My body is falling apart. I want to carefully consider the future."

Hakuho, who tested positive for COVID-19 in January, also pulled out of a tournament in September after several wrestlers in his stable tested positive.