(Reuters) - Former MotoGP rider Michael Laverty announced on Friday the creation of a new British-backed Moto3 outfit after taking over the assets of the departing Petronas Sepang Racing Team (SRT).

"For some time now it has become especially difficult for British youngsters to make it, without a home-grown team competing at the top level," said Laverty.

"Far too often young British riders have been overlooked because of a lack of sponsorship or financial support," added the Northern Irishman.

"We know there is a lot of talent out there just waiting for an opportunity. We believe that with the Vision Track Honda team we can offer them a more supportive route into Grand Prix racing."

Cal Crutchlow, the first Briton to win a premier class grand prix since the late Barry Sheene in 1981, retired from full-time racing at the end of last year.

There are no British riders on the MotoGP grid for this weekend's San Marino Grand Prix at Misano but Jake Dixon and Sam Lowes are in Moto2 and John McPhee in Moto3.

SRT announced in August it would cease operations at the end of the year, although principal Razlan Razali and team director Johan Stigefelt are continuing in MotoGP with a new entity.

"At the end of the season I’ll purchase all the (Moto3) material, all the bikes, all the equipment, the flight cases, the garage. I’ll try and keep on as many of the staff as I can," Laverty told BT Sport, where he also works as a pundit.

"There’s a lot of British staff in there that were going to be out of work, so it would be good if we can keep them on board." 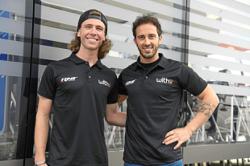