By Sam Nussey and Rozanna Latiff

TOKYO (Reuters) - Frenchman Bassa Mawem scaled close to the world record in the speed section of the Tokyo Games climbing competition, as more than a third of the 20-man field posted personal bests in a sensational start to the sport's Olympic debut on Tuesday.

Bassa, who is competing alongside his brother Mickael and is the oldest contender in the field at 36, hit a personal best of 5.45 seconds, just short of the world record of 5.20.

He took an early lead in the competition in which the eight athletes with the best combined score across three events - speed, a vertical sprint; bouldering, which tests problem-solving skills on low walls; and lead, a technical climb against the clock - will advance to Thursday's final.

In a good showing for host Japan, Tomoa Narasaki recorded his fastest time of 5.94, coming in second after Bassa, while Mickael rounded out the top three heading into the bouldering section.

The Czech Republic's Adam Ondra https://www.reuters.com/article/olympics-2020-clmb-idUSL4N2P70BK, an accomplished technical and outdoor climber considered to be one of the top medal contenders, finished down in 18th place with 7.46 seconds.

The unusual combined format - the climbing equivalent of a triathlon - has pushed athletes out of their comfort zones with the ranking system https://www.reuters.com/lifestyle/sports/sport-climbing-athletes-forced-out-comfort-zone-new-combined-event-2021-06-28 creating plenty of potential for upsets.

The three walls stand side-by-side at the temporary Aomi Urban Sports Park venue near the Tokyo waterfront with the event to introduce the sport's competitive iterations and many of its big personalities to a global audience.

Climbing's inclusion in the Olympics along with events such as surfing and skateboarding is an attempt by the International Olympic Committee (IOC) to broaden the appeal of the world's largest sporting event.

It brings to the Games a new breed of athlete, some of whom are adept at both competition and climbing rugged outdoor routes.

The sport has become an alternative to traditional gyms as climbing walls spring up in urban centres offering a full body workout to a younger demographic drawn by its associations with adventure.

While the combined format favours all-rounders in Tokyo, climbing will be split into speed and a combined bouldering and lead event at the Paris Games in 2024.

The women's competition begins on Wednesday. 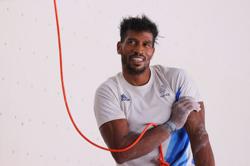 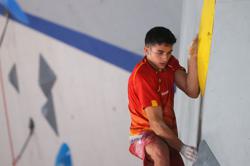