TOKYO (Reuters) - Japan's top government spokesman said on Monday that the Belarusian athlete who had sought protection from police during the Olympic Games was safe.

Chief Cabinet Secretary Katsunobu Kato also told a news conference that authorities, including the International Olympic Committee, were working to confirm her intentions, and that Japan would take "appropriate steps" in cooperation with other bodies.

Sprinter Krystsina Tsimanouskaya, 24, refused to get on a flight from Tokyo on Sunday after being taken to the airport against her wishes by her team following her complaints about the national coaching staff at the Olympic Games. 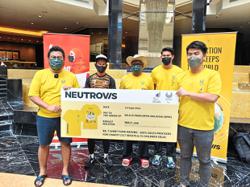