TOKYO (Reuters) -Australia's Jessica Fox won gold in the first ever women's canoe slalom on Thursday, adding to a kayak slalom bronze earlier this week, with a near flawless run down a challenging white water course in Tokyo.

Fox arrived in Tokyo looking for gold in both the canoe and kayak, but that dream was shattered on Tuesday when two pole strikes earned her a four second penalty. On Thursday she held her nerve to power through the finishing line with no time penalties, slapping the water in celebration when she realized she was the first women's canoe slalom Olympic champion. 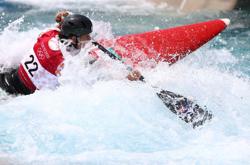