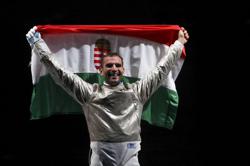 TOKYO (Reuters) - High-ranking Hungary and Italy will clash in the semifinals of the men's sabre team event on Wednesday, with individual gold medallist Aron Szilagyi and Luigi Samele with silver set to face each other again on the piste.

Italy, ranked third in the world, faced sixth-ranked Iran across the piste in a tense quarterfinals.

In the final bout, Iranian Ali Pakdaman gained 11 points against Italian Luca Curatoli's four, tying the two teams at 44-44. The South Korean team and Hungary's Szilagyi watched the two battle it out on a screen in the mixed media zone, where journalists interview fencers after their matches.

But in one clear and decisive swipe, Curatoli took the final point, winning the match at 45-44 and taking his team to the semifinals to face Hungary.

Hungary, however, has Szilagyi in their ranks.

Szilagyi won his third gold medal in the individual sabre competition on Saturday, making history by becoming the first man to win three Olympic golds in an individual fencing competition.

"They are very technical fencers, they can do anything with the blade," Szilagyi said of the Italian team after his match with the United States.

"So we have to grow on their level and come out with a strategy," he said.

Top-ranked team South Korea will face Germany for their semi-final round.

Germany came out strong against the Russian Olympic Committee in their quarterfinal round, ending the match at 45-28.

"I think we don't have anything to lose – Korea's the top favourite, they're a three-time world champion... (but) when we as a team continue to fight like this, I think we have the chances," German fencer Richard Huebers said.