TOKYO (Reuters) -A storm off Japan's east coast disrupted some events at the Tokyo Olympics on Tuesday but spared the host city the devastating winds and rain that were initially feared.

Sun emerged just after Canada beat Mexico https://www.reuters.com/lifestyle/sports/softball-canada-win-bronze-by-beating-mexico-3-2-2021-07-27 for the softball bronze, playing through a steady drizzle and the strongest gusts of the tournament in Yokohama, just south of Tokyo. Technicians had removed the two dozen outdoor television monitors used to watch replays, and ushers handed out ponchos to media and officials in the spectator-less stadium.

Surfing organisers moved the semifinals and finals to Tuesday from Wednesday to take advantage of larger waves spurred by the storm, but conditions were far from ideal. Strong winds created an unruly afternoon lineup that proved something of a leveller for competitors, contributing to some upset results https://www.reuters.com/lifestyle/sports/surfing-surfers-embrace-stormy-conditions-with-medals-up-grabs-2021-07-26.

Japan's hot, wet and unstable summer weather patterns have been a persistent concern for the Games, which opened on Friday, compounding difficulties for an Olympics being held under a COVID-19 state of emergency.

Tokyo was forecast to receive up 35 mm (1.4 inches) of rain over 24 hours from tropical storm Nepartak, now forecast to make landfall in the north early Wednesday, the Japan Meteorological Agency said. It was headed toward Sendai, 370 km (230 miles) up the coast from Tokyo, according to the Tropical Storm Risk monitoring site.

Although Tokyo avoided a predicted overnight deluge, Nepartak remained a tropical storm, able to pack winds up to 118 kph (73 mph), as it meandered off Japan's east coast, rather than weakening to a tropical depression while ploughing northwest, as earlier forecast.

The storm had earlier disrupted the schedules of rowing and archery. The men's triathlon went ahead on Monday.

The Japanese army said it was monitoring the situation, ready to deploy its FAST-force disaster troops if needed. South of Tokyo, the authorities were warning residents to prepare for more heavy rain after 21 people died in mudslides from torrential rains early this month. 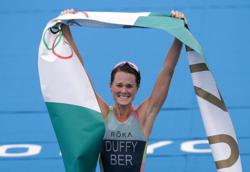 Olympics-USOPC will require COVID-19 vaccine for all U.S. athletes at Beijing Games
Tireless frontliner Sivarajan ‘walks’ into Malaysia and Asia Book of Records
‘The Model’ looking good for return to cage after a year away
Australian Rules-Footy fever runs high as Perth gets a Grand Final
Mask makers hail para athletes for triumph in the face of adversity
Wei Lun sets his sights on making it to France Paralympics 2024
Sport-Charity launches campaign to tackle dementia on World Alzheimer's Day
Climbing-Boulder and Speed World Cup in Seoul cancelled due to COVID-19
Climbing-Global group apologises to Austrian climber for 'objectification' in broadcast
Triathlon-World sprint and relay championships in Bermuda cancelled due to COVID