CHIBA, Japan (Reuters) - Refugee Kimia Alizadeh, who won a taekwondo bronze medal for Iran at the Rio Olympics, beat an erstwhile compatriot on Sunday to qualify for the Tokyo Olympic tournament in the women's -57kg category.

Competing under the white flag of the Refugee Olympic Team, 23-year-old Alizadeh was a clear favourite in the Makuhari Messe arena, entering to applause from members of the media and others present in a venue at which no general public spectators were allowed.

Cheers erupted again when she finished the match against Nahid Kiyanichandeh with an 18-9 win.

Alizadeh became the only woman to win an Olympic medal for Iran when she took bronze at Rio in 2016. She fled to Germany last year, and is one of three taekwondoin and 29 athletes competing for the refugee team at Tokyo.

Popular on Instagram with 407,000 followers, Alizadeh has abandoned the hijab she had worn in Rio, and has said she left her homeland because she was fed up with being used as a propaganda tool.

Alizadeh will advance to the Round of 16 contest to go up against Britain's Jade Jones, who is looking for a historic third gold medal on Sunday. 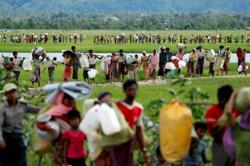