* 12 men's and 10 women's teams are split into two groups with qualifying teams moving into knockout rounds.

* Games take place over four eight-minute periods with two teams of seven players aiming to score the most goals.

* Players dribble, pass and block the ball - all while treading water. The goalkeeper, who wears a red cap, can touch the ball with both hands.

The U.S. women's team took gold after beating Italy 12-5, the largest margin of victory in the history of Olympic finals, while the Serbian men's team defeated fierce sporting rival Croatia.

The U.S. women's team will be hoping to secure a third consecutive Olympic gold. In the men's event, Hungary will be out for payback after failing to make the podium in Rio or London.

Water polo, which has been described as a lung-busting combination of swimming, basketball and rugby, dates back to 19th century Britain and made its first Olympics appearance at the 1900 Games.

Water polo has a loyal following in Eastern Europe with Hungary a traditional powerhouse. Women's water polo was added at the 2000 Sydney Olympics.

The most infamous water polo match was between Hungary and the USSR at the 1956 Melbourne Olympics. Taking place just weeks after Soviet tanks rolled into Hungary to supress an uprising, referees stopped the match after a Russian player punched one of Hungary's team. 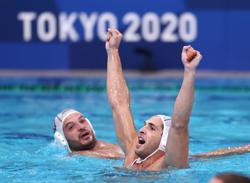