PETALING JAYA: Youth and Sports Minister Datuk Seri Reezal Merican Naina Merican said the RM5mil sponsorship by FWD Takaful is the perfect impetus for Malaysian athletes to do their best at the Tokyo Paralympics.

In addition, Takaful will also give monetary rewards to the para athletes who return with medals from the Games.

“We would like to thank FWD Takaful for sponsoring RM5mil for season 2020-2021 to the National Sports Council (NSC) to help the athletes prepare for the Tokyo 2020 Paralympics and other tournaments,” said Reezal.

“They will also provide incentives to athletes who win medals at the Paralympic Games. Gold medal winners will get RM100,000 while the silver and bronze medallists will get RM50,000 and RM30,000 respectively.

“They are also considering extending the same incentive to coaches.”

For the Paralympics, the target is to emulate the success in the Rio de Janeiro 2016 Games where they won three gold medals. The sports targeted are badminton, athletics, powerlifting and archery.

Ridzuan, Ziyad and Latif will look to defend their titles in Tokyo and Malaysia will be banking on world number two Cheah Liek Hou to win the men’s singles SU5 gold medal in badminton, and Bonnie Bunyau in the men’s powerlifting.

World champion S. Suresh is also a candidate to get gold in the men’s individual recurve archery event.

The 27-year-old archer died from a heart attack on the second day of Hari Raya.

“It will be a one-off payment to his next of kin. We will also be doing a cardiovascular test on all the athletes based at NSC from now on. In the past, it was medical check-ups, but with modern technology, we will also do scans for their hearts.

“We have also improved the insurance coverage for all NSC athletes.” 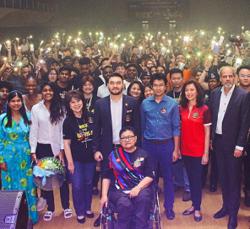