FILE PHOTO: British Olympic sailor Hannah Mills poses in Weymouth and Portland, Britain with the gold medal she won at the 2016 Rio Olympics in the 470 dinghy class with her partner Saskia Clark, September 14, 2016. REUTERS/Alexander Smith

LONDON (Reuters) - British Olympic sailor Hannah Mills is in many ways similar to most elite athletes in Tokyo this summer in her goal of going for gold, but what sets her apart is the other mission she is simultaneously embarking upon.

Mills, who won silver in the women's 470 class sailing at London 2012 and gold in Rio de Janeiro four years later, is looking to become the most successful female Olympic sailor of all time by winning another gold medal in Japan.

But, while preparing for the open seas with partner Eilidh McIntyre, Mills' other passion is something altogether more important - sustainability and the eradication of single-use plastics - and she plans to educate others, athletes and beyond, this summer on how to combat this ever-growing problem.

"I have experienced first hand the damage we are doing to our oceans, especially with single-use plastics," Mills, who was appointed Member of the Order of the British Empire (MBE) in 2017 for services to sailing, told Reuters.

"I was compelled after Rio to raise awareness about this and feel really strongly that athletes have an incredible platform to be able to do speak out about it, alongside sport.

"To get the message out about something we care about this summer, something that is negatively damaging our planet, would be pretty amazing."

According to the United Nations' Environmental Programme, global plastic production has surged to 8.3 billion tonnes since the early 1950s, with single-use plastics making up 40% of the world's total.

Around the world, one million plastic drinking bottles are purchased every minute, while five trillion single-use plastic bags are used worldwide every year. In total, half of all plastic produced is designed to be used only once — and then thrown away.

Mills believes it is simply a matter of highlighting the issues around how much of this plastic, that is non-biodegradable and takes years to disintegrate, damages the environment, to a wider audience.

"I have found that once people have been made aware of the plastic problem, how bad it is and the repercussions of that, it is quite hard to go back from and you are a convert straight away," Mills said. "You start seeing it everywhere.

"I started my Big Plastic Pledge campaign in 2019, which is all about engaging other athletes, fans, sponsors, everyone to do with sport, in trying to eradicate single-use plastics in sport.

"I have been working really closely with one of Team GB's sponsors, GoDaddy (a web hosting company), to build an athlete tool kit, which helps educate them and gives them the tools and information to speak about these kinds of problems when we are not experts."

Then there is the task at hand on the water. Mills planned to retire last year, after Tokyo 2020, but the Games' delay forced a change of heart for the 33-year-old.

"I am here (Japan) and happy," Mills said. "Team GB have done a fantastic job in creating that Olympic environment. We were all a little bit nervous that experience would not be there with the hard Covid measures that are in place.

"The accommodation we are in is decorated with all the Olympic banners. Things like that remind you of where you are and what you are doing."

Nothing could have prepared Mills for one aspect of racing in Japan she had not previously considered.

"It is amazing to be out on the water again," she added. "It is two years since we were in Japan sailing and racing.

"Some people in the team have already seen some sharks cruising around, so it is stark reminder that they are definitely here, which is not great for me.

"Overall we are really confident. Everything is in place for us to go and deliver and really good performance."

One thing, even on the open water, never strays far from Mills' mind, however.

"There is still a lot of work to be done on awareness, but I feel like we are almost there and now it is about solutions," she added. "If we get rid of single-use plastics, what do we replace them with and how sustainable is that.

"Ultimately, though, consuming less is better and if we can change some attitudes towards that this summer then that is amazing." 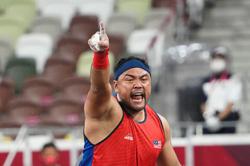