By Ju-min Park and Antoni Slodkowski 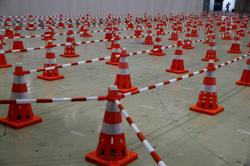 A fountain is pictured at the Tokyo 2020 Olympic and Paralympic Village in Tokyo, Japan, June 20, 2021. REUTERS/Kim Kyung-Hoon

TOKYO (Reuters) - Tokyo Olympics organisers said on Monday they had capped the number of spectators at 10,000 for each venue during the Games. Foreign spectators have already been banned.

Following are the details on the ticket sales following the new limits:

Ticket holders in Japan have been given a chance to ask for refunds because of the one-year postponement to the Games caused by the coronavirus pandemic.

Organisers said on Monday that 840,000 tickets had been refunded so far, out of a total of 4.48 million sold through the initial lottery.

Because of the new limits, the organisers will organise a fresh lottery to whittle down the number of spectators to 2.72 million, according to Tokyo 2020 CEO Toshiro Muto, meaning some 910,000 ticket holders will lose their chance to see the Games.

Muto said the lottery would be conducted through an electronic system without human involvement to ensure fairness.

Muto said the revenue from ticket sales would amount to less than half of the projected $817 million (90 billion yen). The organisers will discuss with the national and Tokyo governments on how to make up for the shortfall.

'NO SPECTATORS' SCENARIO STILL ON THE CARDS

The government will review the current coronavirus "quasi-emergency" state in Tokyo on July 11. Government experts have said that the 10,000 cap on sporting events would only apply to regions where the "quasi-emergency" has been lifted.

The organisers said the number of spectators could be restricted based on the content of any state of emergency from July 12, including an option of holding the Games without spectators should the COVID-19 situation worsen.

Muto said officials involved in organising the Games would in principle not be included in the count of spectators.

The organisers did not specify what would happen to ticket holders in the event of the Games being held without spectators.

Further details on ticket distribution will be disclosed on Wednesday.

The organisers said they would provide a guideline during this week for ticket holders and spectators, including on how to travel from home to the venues and how to observe coronavirus-related protocols while cheering on the athletes.