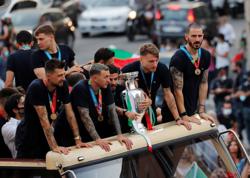 ROME (Reuters) - Roberto Mancini made eight changes to his Italy team for their final Euro 2020 Group A match on Sunday, while Wales boss Robert Page decided to leave out three players at risk of suspension.

Azzurri captain Giorgio Chiellini was unavailable after picking up a knock in the 3-0 win over Switzerland on Wednesday, while Manuel Locatelli, who scored twice in that match, and Ciro Immobile, who has two goals in two games, were on the bench.

Mancini previously made just one change between the first two games, replacing injured right-back Alessandro Florenzi with Giovanni Di Lorenzo, as they comfortably defeated Turkey and Switzerland in Rome.

Wales boss Robert Page also freshened up his side, leaving out Chris Mepham, Ben Davies and Kieffer Moore with all three one yellow card away from missing the next game.

Ethan Ampadu, Neco Williams and Chris Gunter come into the starting team in their place, with the latter earning his 102nd cap.

Following are the teams for the European Championship Group A match between Italy and Wales in Rome on Sunday.

(Reporting by Simon Jennings in Bengaluru; Editing by Andrew Cawthorne) 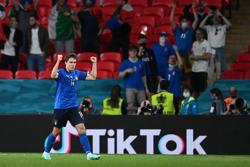