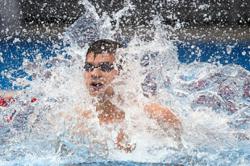 (Reuters) - Lilly King and Ryan Murphy are headed to Tokyo to defend their Olympic titles after the two world record holders won their events at the United States Olympic Swimming Trials on Tuesday.

Murphy, winner of three gold at the 2016 Rio Games, touched first in the 100 metres backstroke in 52.33 seconds ahead of Hunter Armstrong.

"It just means so much to make another Olympic team," said Murphy. "Those guys are fast, the United States has always had a lot of good young backstrokers, they come out of nowhere."

The United States has dominated the men's 100m back at recent Olympics, taking top spot on the podium at the last six Games.

King, a double gold medallist in Rio, won the women's 100m breaststroke in one minute, 4.79 seconds ahead of 17-year-old Lydia Jacoby, who could become the first swimmer from Alaska to qualify for the U.S. team.

Regan Smith arrived in Omaha as the world record holder in the 100m backstroke but the 19-year-old stepped onto the blocks on Tuesday looking to take it back from Kaylee McKeown, who set the new mark of 57.45 on Sunday at the Australian trials.

Smith when out in a blistering pace and was under the world record at the turn but faded in the final 25m and failed to reclaim the mark. She touched first in 58.35 to set up what should be a scintillating showdown with McKeown in Tokyo.

"It started to hurt really bad, I could see girls on both side of me and so I had to get my hand on that wall the best I could," said Smith.

Kieran Smith, winner in the men's 400m freestyle on Sunday, also touched first in the 200m, clocking 1:45.29 ahead of Townley Haas.

"I slept really well last night," said Smith, knowing he made the U.S. team. "I was lucky to have the morning off, got some good rest in today and tried to put up the best time possible tonight."

Katie Ledecky, who secured her Tokyo ticket with a win in the 400m freestyle on Monday, was back in the pool for the 200m free semi-finals posting the top time of 1:55.83.

The five-time Olympic champion has a hectic Wednesday ahead of her as she attempts to qualify in both the 200m and 1,500 free with the finals just an hour apart.

(Reporting by Steve Keating in Toronto. Editing by Peter Rutherford) 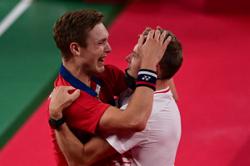 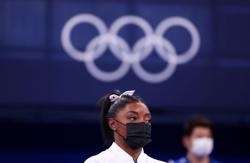