Japan plans to cap daily arrivals at 2,000 people ahead of Games: Nikkei 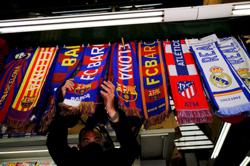 FILE PHOTO: A man wearing a protective face mask walks past in front of a display showing the logo of Tokyo 2020 Olympic Games that have been postponed to 2021 due to the coronavirus disease (COVID-19) outbreak, in Tokyo, Japan January 23, 2021. REUTERS/Issei Kato/File Photo

(Reuters) - Japan plans to cap the number of daily arrivals into the country at around 2,000 and allow exceptions to the ban on international travellers after the COVID-19 state of emergency is lifted in Tokyo ahead of the Olympics, Nikkei reported on Monday.

The newspaper report added that the proposed number will include Japanese nationals returning to the country, citing individuals familiar with the matter.

Japan has temporarily suspended exemptions allowing foreign athletes to train in the country ahead of the Games as it closed its borders to contain a surge in COVID-19 cases. The state of emergency in the capital has been extended until March 21.

More than 70,000 people - including athletes, coaches and media representatives - are expected to enter the country for the Games, Nikkei reported earlier, citing estimates in Japan.

Test events for the Olympics are to start in April. The Games are scheduled to begin on July 23.

Last month, Olympic officials unveiled the first of many COVID-19 rules for the Games, starting by banning singing and chanting during events and mandating participants to wear masks at "all times" except when eating, sleeping or outdoors.