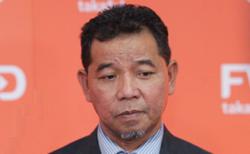 KUALA LUMPUR: The National Sports Council (NSC) have refuted claims that they practise favouritism when dealing with national sports bodies.

The Malaysian Karate Federation (Makaf) secretary Datuk Nur Azmi Ahmad was disappointed with the treatment given by the NSC and wanted the government agency to be fair to all associations.

He felt that local coaches could have been given better salary deals when they had already helped the country achieve outstanding results.

NSC director general Datuk Ahmad Shapawi Ismail (pic) in a statement said they did not intervene in the decision making process Makaf made recently.

“It was Makaf who decided not to continue with Iranian coach Ali Reza Souleymani because of their internal problems and we respect their decision, ” said Shapawi.

“Subsequently, Makaf decided to take in former national exponent R. Puvaneswaran who formerly handled the back-up squad before his contract was not renewed.

“After he ended his services in Thailand, Makaf decided to bring him back and we also respected that decision.”

Shapawi added that the NSC have to abide by the guidelines under the National Coaches Certification Scheme when it comes to salary scale of local coaches.

“Makaf are aware of this. We welcome Makaf to put up additional incentives to the coaches as what other sports associations are doing based on their own financial capabilities.

“We will discuss with Makaf again on this matter through the working committee meeting expected to take place next month.”