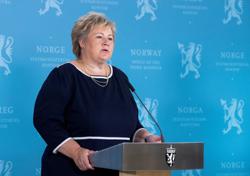 Cousins Tiril and Heidi Weng skied the first two legs in classic style to hand Johaug, who had already claimed two individual gold medals in Oberstdorf, a lead of 2.6 seconds at the halfway point ahead of the two freestyle legs.

The 32-year-old increased that gap to 19.8 seconds after a smooth, powerful display over her two laps to set up teenager Helene Marie Fossesholm, who comfortably held off the challenge of Natalia Nepryaeva to secure the gold by 26.6 seconds.

Finland, the United States and Germany fought out a titanic last-lap struggle for third, with Krista Parmakoski and Jessie Diggins eventually breaking away over the second-last climb, and the Finn edged out the American in a thrilling sprint finish to win the battle for bronze by eight-tenths of a second.

Reigning champions Sweden fell apart completely as Charlotte Kalla's disastrous second leg left them one minute and 39 seconds behind the Norwegians at the halfway point, wiping out any chance they had of making the podium. 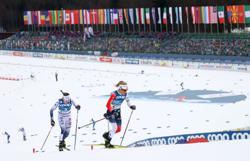